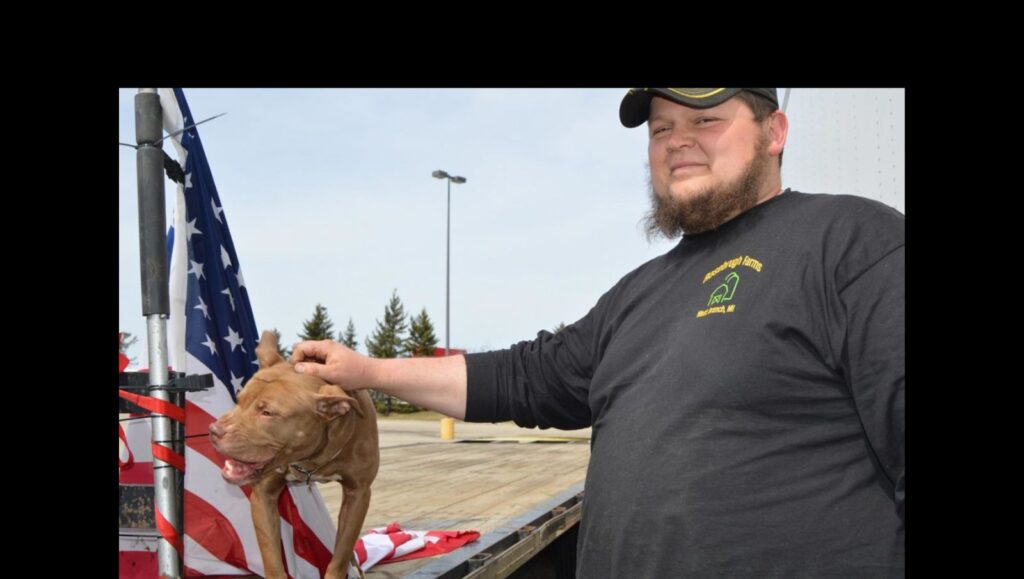 Russell Sperry, Jr. (pictured above) is an Army veteran who hauled wood shavings and sawdust for the orphan calf (baby cow) relief facility, shared a reflection from the humbling experience to pay it forward for his country.

It was 6 a.m. on March 31. I didn’t need a clock to tell me – my whole body knew. The whole community had been preparing for this moment for two weeks. In fact, 6 a.m. was late for some. Trucks in northeast Michigan were already warmed up and ready to drive to southwest Kansas. Destination: Ashland, Kansas, in Clark County, where wildfires raged through on March 6.

More than 85% of Clark and Comanche Counties in Kansas burned. In total, the “Starbuck Wildfire,” as it has been named, burned more than 800,000 acres in Clark, Comanche and Meade Counties. To put this in perspective, Michigan’s Belle Isle Park is 982 acres and Isle Royale National Park is 571,790 acres.

Anyway, 6 a.m. had me sitting at a neighborhood road corner listening to the local radio station playing our national anthem. I sat there with my dad in silent respect, hats off, goosebumps and tears present. Earlier that week I had asked my grandmother to play some patriotic hymns on the piano. Despite having Alzheimer’s, she played several without a problem. Pride in our country runs deep and is nearly impossible to forget.

Our mission on March 31 was to bring 20 trucks with trailers overloaded with donated animal food, fencing supplies, household items and other supplies for farmers and ranchers to carry on one more day to rebuild from the ashes. Imagine miles [and miles and miles] of homes, barns and garages, vehicles and farm equipment, windmills and grain bins, electrical poles, pastures and, tragically, animals, all burned. I take that back – please don’t imagine it. We saw just a fraction of the devastation, and we only brought a fraction of what is still needed there. However, the unspoken understanding of our gifts of community solidarity were perhaps the strongest message.

When telling people about convoy plans, the support was overwhelming. Roy Smith, a dairy farmer who helped organize the convoy, said, “There are tons of people across the U.S. sending relief and supplies. Seeing this made me think about our community and what we could do. I decided to get on the tails of many great people who have already trucked south with hay. This may be the most humbling experience I have ever been part of.”

Hear and see more of Roy’s story in this short video about coordinating efforts for the convoy:

Sarah Smith, Roy’s wife, described her support of the initiative to provide help to wildfire victims and blogged along the way at “1173 Miles to Ashland.”.

Farmers give back more than they take. At our last fuel stop on April 1 before Ashland, a woman made a point to swing by the truck I rode in. She said, with tears in her eyes, “Thank you. Thank you for what you’re doing. Helping our farmers. Thank you.” It was a sobering moment to realize just how deeply this effort touched people, whether or not they were personally receiving donations.

Chatter between our trucks on the CB radio to this point had been almost constant. As we neared our final destination, conversation ceased. Could everyone feel it? We came over a hill and there it was – nothing. Behind us stood beautiful, impressive countryside and ahead stood charred remains of homes, farms and ranches. If I still had goosebumps from the anticipation of 6 a.m. the day before, I couldn’t feel them because now I was numb.

After unloading supplies in Ashland, I took a moment to ask a group of local residents in the gas station what was needed most. Their shoulders slumped a bit when they said, “Help.” Here were people who have worked their lifetimes building businesses hand-in-hand with the land and animals – diligently and oftentimes silently. They have respect for our environment, and a rediscovered respect for fire and wind, natural elements out of our control. Asking for help – both physical and monetary – when so many others are in need isn’t a natural request for many in the agricultural field, but this community has had to accept an overwhelming amount of help from “neighbors” across the country.

Victor Mier, a farmer from Prescott, Michigan, who was a volunteer in Ashland with his wife, Rose, and who was one week ahead of the northeast Michigan convoy, described the significance of community efforts.

The longer we lingered in Ashland, the longer I wanted to stay. The devastation is unimaginable to a lot of us who live in the Great Lakes State. In Michigan, we’re never more than six miles from a fresh water source. That’s just not the case in southwest Kansas where water is consistently scarce. It rained the day we were there, and the promise of the earth being rejuvenated made those goosebumps come back in full force. It was time to make the long drive home and get back to our own farms.

Larry Kartes, a farmer who traveled among the convoy with two sons and two grandsons, talked about the impact made by his community and the impact on his family from the experience of stepping in to help.

Jock Kartes, one of the convoy organizers and one of Larry’s sons, described his experience and the ways his community stretched its arms out to the community in need in this short video: